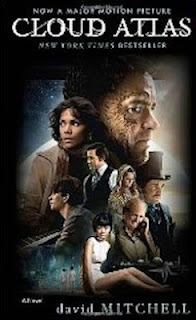 Cloud Atlas is a collection of six stories which all happen at radically different times in history, yet all entwined in such a way as to explore fundamental questions of reality and identity, and how the two link over time.  On a secondary level, it is a study of oppression, of overcoming man’s worst enemy—himself.

It begins in 1850 as an American notary, Adam Ewing, voyages across the Pacific. Ewing falls under the care of a corrupt doctor, Dr. Goose, who treats him for a rare species of brain parasite, but has dark intentions. The second story jumps to Belgium in 1931, where an impoverished, gay composure, Robert Frobisher, takes a job helping an infirm maestro compose the last works of his life, and is seduced by the composures wife. Story number three takes place on the California coast in the 1970s. A troubled reporter for a third-rate paper, Luisa Rey, stumbles upon a corporate plot surrounding a nuclear power plant.  She becomes tangled in a web of greed and murder that threatens her life. The next story is a tragic/comic tale of Timothy Cavendish, a publisher who’s brother locks him away in a mental hospital in present-day England. The most creative story is a futurist story in Korea where neocapitalism has run amok, and slaves are cloned to perform all service tasks. An underground uprising is in the works to free the slaves, and their only weapon is truth. The final story is set in a post-apocalyptic age in Hawaii, where survival is based on brute strength and cunning.

One of the things I loved most about this novel is that each story is told in a unique and purely captivating voice. Likewise, the characters and settings in each story are equally as distinctive. It felt like reading multiple stories from six different authors all on a common theme, yet all these disparate characters connect, their fates intertwine, and their souls drift across time like clouds across a globe.

I confess that Robert Frobisher’s story stood out as my favorite. Told in the form of letters to his lover, Rufus Sixsmith, it is one of the most touching gay love stories I’ve read in years. The letters create an intimacy that is both moving and poignant. Still, all six stories are superbly executed, equally captivating.

This book has everything a reader could ask for, as fun and wild as a rollercoaster, as mysteriously wise as a Zen koan. It is grand and fearless, foreign and strange, yet strikingly intimate. I can’t wait to read it again.

Posted by AlanChinWriter at 8:28 AM