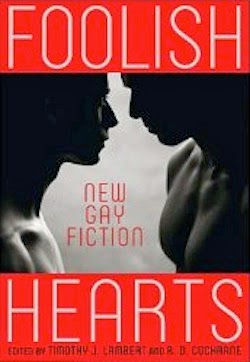 I have always been a short story fan. I grew up reading the best ... little treasures I could read in a single sitting. Of course, they were Science Fiction written by authors like Ray Bradbury back then. Today, I'm a lot older and my lifestyle has changed quite a bit. I'm gay, and I like fiction that reflects my way of life. Not the one-handed stuff with sex dripping on every page, but good two-handed fiction that captures genuine human emotions and attitudes in its many faceted ways. And this is what FOOLISH HEARTS delivers!

Timothy J. Lambert and Becky Cochrane have assembled a perfect collection of seventeen stories that reflect that many variations of gay love and romance from yesterday to today. The authors are as varied as the stories they tell -- Felice Picano, Andrew Holleran, 'Nathan Burgoine, Jeffrey Ricker, David Puterbaugh, Rob Williams, Greg Herren, Paul Lisicky,Taylor McGrath, Mark G. Harris, Tony Calvert,Timothy Forry, Erik Orrantia, Steven Reigns, Rob Williams, Craig Cotter and Trebor Healey. I had my favorites, and you surely will have yours. Good reading all around. 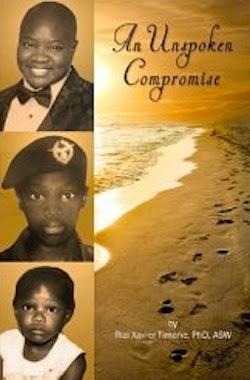 Rizi Xavier Timane was born in Nigeria to proud parents who loved her and who had high hopes for their daughter. The problem was, Rizi was transgendered, a boy trapped inside a girl’s body.  As he grew older, his family and school chums assumed he was a Tomboy, but as he matured into his teens, they began to think he was a lesbian. He was taunted at school and forced to undergo numerous exorcisms by the church to cast out the gay devil living inside him. He always knew, however, that he was not a lesbian, but rather, a male with the wrong body.

Rizi eventually fled Africa to escape his God-fearing parents and the religious wingnuts at the church, first to England for advanced schooling, and then to Los Angeles to live his life without persecution.  But even in L.A., he was shunned when he tried to join church groups. Then, after finding a life partner, Christina, he decided to finally fix his gender issue, and started conversion therapy.

This wonderful memoir chronicles Rize’s journey, first as a lesbian and then as a transgendered male.

I developed a love/hate relationship with this book. The lion’s share of these pages is Rizi’s story of self-discovery, persecution, and resolution. His story is both thought-provoking and heartfelt. He gives moving details of his feelings and his courage, and also gives accounts of how African culture violently crushes anything having to do with the LGBTQ community.

The part I had trouble with was a sizable section of the book that was basically a religious argument (Fundamentalist Christian) justifying why Christians should embrace the LGBTQ community. Frankly, as a non-Christian, I found this part of the book extremely off-putting. I’m sure only non-Christians will have issues with this. 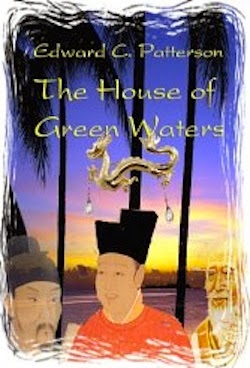 A Brilliant Work that will Linger in your Heart and Soul

This delightful adventure tale is book IV of Edward Patterson’s Southern Swallow series. The House of Green Waters, like its predecessors (The Academician, The Nan Tu, and Swan Cloud) is told by K'u Ko-ling, the amusing servant to the Grand Tutor, Li K'ai-men, who has been living in exile for thirteen years on the harsh, tropical island of Hai-nan.

Set on the broad canvas of Sung Dynasty China (12thCentury), The House of Green Waters is a collage of historical adventure, intrigue, and love. While Li K’ai-men and his entourage suffer in a fly-infested wetland, slogging through jungle streams and unfurled on deserted beaches, China’s political world explodes as a mad prince invades the Sung Empire. It’s a time for heroes and riveting warfare, including the first recorded battle in history to deploy poisonous gas as a weapon.

This story is a passing of the torch, where sons take power from fathers, and a new generation of heroes rise up to sacrifice themselves in the fight against injustice. It is also a deeply touching love story, as Li K’ai-men and his devoted lover, Fu Lin-t’o, come to their last days together, and also reach the pinnacle of their love for each other. The adoration shown on these pages rivals anything I’ve read for its beauty and raw emotion.

I have adored all four books of the Southern Swallow series for a number of reasons. First, I particularly enjoyed the characterizations in this character driven novel. Patterson has created a number of interesting and likeable characters. They are flawed, and struggle to overcome those defects. Even the "bad-guys" developed into memorable foes.

Second, the author skillfully weaves an intriguing plot that holds the reader to the page, blending history, adventure, love, and magic to form an unforgettable tapestry.

The author has created a delightful voice. The tale is told both in third person, and also K'u Ko-ling’s first person narratives. Both voices are distinct and captivating. It is a pleasure reading such well-crafted prose.

Edward C. Patterson is a scholar in East Asian culture. So not only is the storyline based on true historical events, but the descriptions of the cultural settings and rituals ring true.  Patterson has done his homework, and it shows from first page to last.

For anyone interested in reading this novel, I would highly recommend reading books I, II, & III first (The Academician, The Nan Tu, and Swan Cloud).  There is simply too much plot and relationship building that occurs in these earlier novels that is needed to fully understand the situations presented in The House of Green Waters.

Readers who love historical fiction will no doubt treasure this series. But these books can be enjoyed by anyone who appreciates fully developed characters and finely crafted stories. This book, this series, is a gem that can be appreciated by everyone.

Love In The Shadows by Dylan Madrid 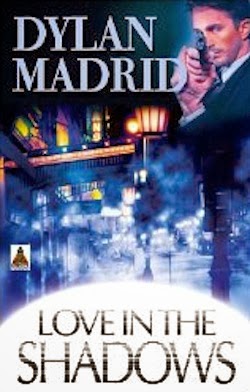 Quintin Pearson is a gay American living in London, who loses himself in his work as a copywriter, trying to recover from the sudden disappearance of a relationship he thought would last forever. An invitation to a reception for the American ambassador becomes a life-changing evening, when the ambassador is murdered, and Quintin meets a mysterious Italian man who seems to somehow be connected to the crime. Subsequent events see Quintin traveling to Belgium to rendezvous with Luca, the man he met at the reception, and to whom he is feeling a definite mutual attraction. Quintin finds himself working with intelligence agents trying to solve the murder of the ambassador, and perhaps preventing another death already planned. 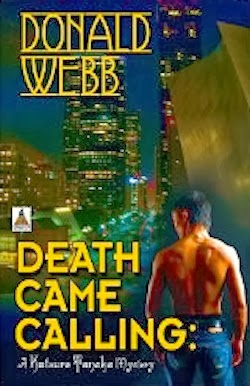 When a high profile lawyer’s death is deemed health related, due to a diabetic seizure, the deceased relative hires Katsuro to investigate. The deeper this clever detective digs, the more it looks like a possible murder. The author provides, of course, a wide array of suspects with motives, and as our hero sifts through the alibies and evidence, more bodies begin to pile up. The danger rises to the point where Katsuro must protect himself, his employee, and his family.

While pulling the clues together, Katsuro is haunted by the brutal murder of Patrick, his late spouse who died two years earlier, and must fight against his own melancholy before it destroys his relationship with his current boyfriend.

This story starts slowly, yet it builds into an interesting read. The protagonist juggles a murder investigation, family responsibilities, a romance, and guilt from his ex-lover’s death, and not only makes it seemed real, he becomes a sympathetic character who the reader cares about.

I found the method of the murder to be cleverly conceived. Solid writing makes this an easy read. I was kept guessing until near the ending. My only complaint was that I felt, as I often do in mysteries, that the ending was too easily disclosed and wrapped up. It seemed rushed.

This is an engaging read that leaves the reader satisfied and wanting more from this talented writer.