The Silent Hustler by Sean Meriwether 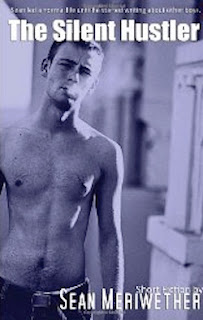 Sean Meriwether stitches together an impressive collection of short stories in The Silent Hustler that are visceral, unsettling, poetic, beautiful, and real. He takes a magnifying glass to the edgy side of gay life, following unique characters that seem to jump off the pages and fire the imagination.

I won’t recount every story, but suffice to say that the author flexes his considerable talent to create a series of disturbing tales that challenge the reader, both emotionally and psychologically. Be prepared to have your senses wounded and healed.

Most of these stories involve young protagonists, still exploring their own confused emotions, as well as the gritty world they find themselves battling against.

In a world where much of gay literature seems to rehash the same ideas presented by the same set of stock characters, The Silent Hustler is a fresh, cooling drink for the senses. The range of themes, diversity of characters, and variety of narrative voices keeps this book a fascinating read all the way through.

Posted by AlanChinWriter at 11:30 AM 6 comments:

The Girls by Victor J. Banis This true story chronicles the nearly fifteen-year love affair between the author and his two dogs, a self-assured spaniel named Jenny and a German Shepherd mix with Jackrabbit ears named Prima. The author adopted them as puppies, and the love affair began, not so much between the dogs and Mr. Banis, but between the two dogs. Yes, this is not your average pet story. It is a tale about the love between these two wonderful animals told by a man who was sensitive enough to understand what they meant to each other.

I ardently believe that until one has loved an animal, part of their soul remains unawakened. It is clear to me that these two dogs not only awakened the authors soul, they did the same for me while reading about their delightful relationship.

This story will warm your heart, make you laugh out loud, and also make you reach for the tissue. It is a beautiful, poignant story told in superlative prose that does not resort to sentimentality. I truly loved every paragraph, every word.

I have long been a fan of Victor Banis, and have read several of his novels and short stories. I believe that this little gem of a story ranks among his best works, both for quality of writing and for emotional impact. Highly recommended to all readers.
http://www.vjbanis.com/

Posted by AlanChinWriter at 1:58 PM No comments: 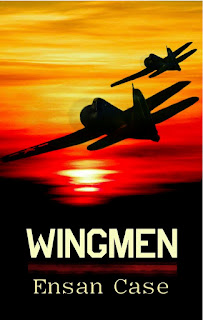 A year after the bombing of Pearl Harbor, Ensign Frederick Trusteau, a naval aviator in the US Navy, finds himself transferred into a new outfit, the F20 fighter pilots in Honolulu. Trusteau (Trusty) quickly earns a reputation as a lady’s man with the other pilots, which couldn’t be further from the truth. He is confused about sexual matters, and dates women because that is what is expected of him, not out of desire. But the one sexual thing that becomes clear to Trusteau is that he gets aroused anytime he comes near his commanding officer, Lieutenant Commander Jack Hardigan.

Hardigan is a flying ace, a hard drinking, hard driving skipper who takes a liking to Trusteau because of Trusty’s flying skills and his likable demeanor. Of course Hardigan also appreciates Trusty’s handsome looks, but he keeps that to himself. The two become so close that Hardigan makes Trusty his wingman, which angers the second in command, who had enjoyed that prestigious position before Trusty came along.

Hardigan and Trusteau grow closer and more intimate, needing each other’s comfort and support until they discover and come to terms with their mutual sexual attraction. They eventually spend a night together in a Honolulu hotel room consummating their love. The second in command sees them together and realizes the nature of their relationship.

The squadron sets sail aboard a fictional aircraft carrier, Constitution, during the later half of the war. They fly deadly missions in several key battles: Wake Island, Tarawa and Truk Lagoon. Both Trusty and Hardigan face danger, are shot down and show extraordinary heroism. In the final battle, Hardigan risks everything to save his wingman. Do they survive the battle? Do they end up together?

This is a well-written, exciting, and emotionally touching novel. It is bound to become a classic in gay literature. It is character driven, and the author takes great care in creating complex, believable characters. I found myself pulling for them on every page.

Case also has a remarkable talent for creating tension in each scene, much of which is derived from the physical and emotional jostling of fighting men jammed together in life-threatening circumstances. And set within these extreme conditions and surrounded by all these manly soldiers, the author paints a touching and plausible love affair between these two men.

I was impressed with the author’s depth of knowledge regarding WWII aircraft, procedures aboard an aircraft carrier, WWII battles, and also the camaraderie among military men. Case has done his homework well, and it shows in the seamless authenticity of the entire story.

My one minor complaint came in the last twenty or so pages where the author wraps up loose ends in a postwar montage that is, for the most part, shown through a series of letters. The ending fell flat and added nothing to an otherwise exhilarating story. Wingman would be a more enjoyable read had it simply ended in 1945. This novel will no doubt be a five-star hit with readers who enjoy MM, gay fiction, and/or historical military fiction. 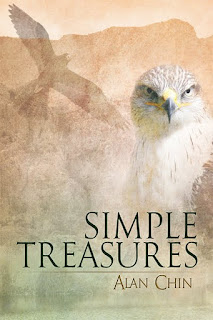 
Having read all of Alan Chin's books, I can honestly say that Simple Treasures is perhaps my favorite. Alan Chin always tells a story with a unique perspective, usually gleaned from a personal reference, and his characters are never the norm. Rather they are fully dimensional individuals who function within their stories as if it's not a narrative but a reality within a book that one is reading.

With Simple Treasures, Mr. Chin takes us on a catharsis of sorts, introducing us to Simple, a Shoshone Indian who has just been released from an institution. Simple goes to work for a hard edged old man named Emmett, who's dying from cancer after a lifetime of drinking and rough living. Simple's job is to care for Emmett in his final days. Only Simple finds that Emmett's world is shared by a grandson named Jude. Jude is a gay young man who sloughs around in Goth attire and generally doesn't have a lot to do with his grandfather, and the sentiment is not one sided either.

As Simple gets to know Emmett and Jude, he finds his feelings for both of them begin to evolve in ways he didn't think possible. While he plans to help Emmett set his spirit free through an ancient Indian ritual he also cannot deny that he and Jude are growing closer, physically as well as emotionally. As Simple strives to give both of his companions the closure and the freedom they each crave, he learns to give himself the same latitude.

Simple Treasures was a delight to read and the message it imparts does not end along with the book. As with Alan's other works, this one has a lesson that will remain with its readers long after the story is told. Well done.