Dreaming Of You by Ethan Day

Reviewed by Aunt Lynn at Reviewsbyjessewave


THE BLURB
Restaurateur Aden Ingle has been in love with the perfect man since his fourteenth birthday. Unfortunately, his perfect boyfriend only exists in his dreams. But Aden’s always believed it was his destiny to meet his dream man, and he’s perfectly content to wait around for him to walk into his real life.
When he meets Logan Price at a Hotel/Restaurant Trade Show, he finds himself drawn to this man who shakes him out of his dream world. Pretty soon, the flesh and blood reality is becoming more appealing than the fantasy. The only problem is Logan lives half way across the country in California.
Aden’s going to have to choose whether to give up everything he’s built for himself professionally and uproot his whole life for Logan, or wait for the man from his dreams to become a reality.

THE REVIEW
Dreaming of You is Ethan Day’s second published work, and the second I’ve read (Self Preservation, reviewed here, sparked quite a bit of lively comment a few months ago). At the time I reviewed SP, I said that I’d be more than happy to read and review his next offering as I thought that he’s a good writer, and, well, here I am. I’m so glad I committed myself to that because this was a great book! I’m not usually a gusher, but this book is gush-worthy. DOY is light and humorous — with some seriously funny laugh out loud moments — and sexy. Well-written and plotted with smart, snappy, witty dialog, it reminded me in some ways of a romantic screwball comedy from the 30s and 40s, and I could easily see this made into a film. I read it earlier in the week when I was having a bad time in RL, and it lifted my spirits and successfully took my mind off things.

I am mad about Aden! Narrated by him in first person, we are privy to his discussions/arguments/negotiations with his inner voice, or what he thinks as opposed to what he says out loud, and it’s hilarious. I loved his odd personality quirks — he’s accident prone, he tends to let his mouth get away from him when he’s nervous, he has a karma point system, he has a need to be liked, he’s a horrible driver, and he has a dream man. Here’s a perfect example of Aden:
I never could stand the thought of intentionally being mean or selfish. It had always been my thing. I couldn’t help myself. When people had described my personality to others, I heard one of two things: “He is the nicest person you will ever meet,” or “He is so nice it’s disgusting.” I’m terrified one day I’ll crack and release the serial killer that’s been lurking inside me somewhere.

I want to be friends with this man! Based on some interviews I found and reading his site and blog, I suspect that there’s a lot of Ethan in Aden. *g*
I thought fellow restaurateur Logan was a wonderful compliment to Aden, a sensitive alpha who is willing to unconditionally accept “the sexiest, sweetest oddball [he’s] ever met,” even finding the quirks adorable. He gets Aden when perhaps others may not have.
I adored how fun Logan and Aden are together, even in bed, and how easy their relationship is. I rooted for these two, especially toward the end when Aden needed to make some choices.
Ethan has not only given us two great protags, but also a large, colorful secondary cast, all of whom are well-drawn and three-dimensional: Nathan and Finn, Aden’s best friends; Logan’s group of friends in LA; Rufus, the pseudo-dream man; even Logan’s mother, who makes an appearance early in the story. I loved how Aden is with his friends, especially Finn (who is a total hoot!), and how just about everyone accepts him, oddness and all.
Ethan is a gifted writer who has a way with prose that sucks you in and makes you see what Aden is seeing. I really liked the depth of description of much of the environment, especially when he is in a restaurant. As a pretty serious foodie who has considered opening a restaurant, I could see the décor, how the room is arranged, what the bar looks like, hear the ambient music, cough on the cigarette smoke. It all felt real to me.

OVERALL
Dreaming of You is one of those feel-good, fun, romantic books that you can immerse yourself in, one I’ll be reading over and over. I highly recommend it, and I am eager to see what Ethan has next for us. 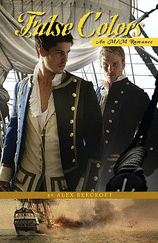 .
.
.
Reviewed by Alan Chin
.
.
.
In 1762, John Cavendish is given his first command, the HMS Meteor. Along with a motley crew and a handsome second in command (Lt. Alfie Donwell), Cavendish receives orders for a suicide mission to attack a fleet of pirates off the coast of North Africa. The captain’s stern moral attitude keeps a distance between himself and Donwell, but before HMS Meteor can engage the enemy, Donwell is captured and beaten to within an inch of his life. Cavendish leads a daring rescue mission and recovers his lieutenant, then unleashes a bold attack and manages to inflict his revenge, complete his mission, and flee the enemy relatively unscathed.

But before they reach the safety of port Gibraltar, Cavendish is wounded during another sea battle, and it’s Lt. Donwell’s turn to play nursemaid. During Cavendish’s recuperation, he and Donwell slowly become close friends – born from each other’s brush with death – so close that Donwell misinterpret the captain’s familiarity and makes an improper advance, professing his love for Cavendish. The captain immediately rejects him, and fearing recrimination which could lead to hanging, he takes a berth on another ship, HMS Britannia where he comes under the protection of Captain Farrant, a gay man whom Donwell has a history. They quickly become lovers, and Farrant tells Donwell, "Stop chasing love. Love is not for men like us. We share a deviancy we must pay for with lives of exemplary duty...You will get yourself hanged if you think otherwise.” Although that seems to be a theme in the story, it’s impossible for the hot blooded Lieutenant to follow such advice.

By the time Cavendish recovers and goes back to sea – not as captain, but as second in command – he has realized why his insides feel like a black hole after Donwell abandoned him. He had unwittingly fallen in love with the handsome Lieutenant. And as horrible as that thought is for this morally prudish man, the only thing worse is not having his love near him. The two men have a series of adventures before destiny brings them together again. And when they come together, with the full knowledge that they love each other, will duty and the threat of hanging keep them from becoming lovers? I won’t give it away, but suffice to say, their woeful adventures are far from over.

Narrated in the manner of a 19th century novel – primarily told, not shown – the characters are kept at a slight distance from the reader. There was not only this slight detachment, but I never really warmed up to either main character. I didn’t dislike them, they simply failed to win my sympathy, so I was not fully invested in their story. These protagonists are complex, flawed and for the most part believable. There were one or two scenes when Cavendish did something so completely out of character that he was not credible. There were several secondary characters that I would have like to have seen expanded, and even with the two lovers there were episodes that could have benefited by drilling to a deeper understanding.

Beecroft is superb at providing believable detail of 18th century life, especially nautical detail. This is where the author truly shines brightest. She puts you on deck of a tall ship and on the smelly wharfs. You feel the wind in your face, the fear of battle, the agony of wounds. At times I felt the story line sagging from the weight of too much description, but those times were infrequent. Although I am, admittedly, not a huge fan of historical fiction, I found myself fascinated by the world Beecroft creates. What I do love are good sea yarns, and False Colors is exactly that.

Beyond the normal romance plot twists, is the convincing story of two men in turmoil, and their only chance for survival is to cling to each other, which of course is seldom the case. The many varied plot twists kept me turning pages. There were times when I felt the storyline was too predictable, and there were certain elements about the ending that I found disturbing, but that did not detract from my enjoyment of this story. I have no reservation in recommending this book to anyone.