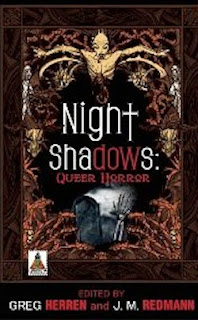 
At a time when it seems werewolves, vampires and zombies are plentiful in LGBT supposedly-"horror" stories, it is very refreshing to find this collection of fourteen excellent short stories, all by well-known authors, who understand that there is much more to the genre, and a bit of subtlety can be very frightening.

The stories in this anthology are quite diverse and all well-written. The longest is the final story, "Ordinary Mayhem" by Victoria A. Brownsworth, exploring the connection of a uniquely-talented photographer to her deceased grandfather. I also liked Steve Berman's delicious "Capturing Jove Lunge," about a man who is summoned to pose for an eccentric mogul who lives for his art and his plants. Felice Picano offers "Room Nine," a fable suggesting a sinister reason for outsourcing. The other stories are similarly unique and engaging.

One of the better anthologies I have encountered in recent years, and I give it a full five stars out of five.

The Trapeze Artist by Will Davis 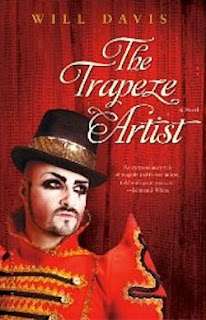 
A shy, fourteen year old boy makes a friend at school, realizes he is gay, and - for the first time - feels truly alive. But that is not to last, and he grows into a man, still living with his invalid mother, until - at age 40 - he finds the courage to run away with the circus, as the lover of an eccentric Romanian trapeze artist, When that adventure ends, he is still fascinated by the life he learned on the road, and makes drastic renovations to his mother's house to carry it on.

The story is told in numerous installments, alternating the three time periods mentioned above. The protagonist - whom the author never actually names - makes a very slow, dramatic and torturous journey from his dysfunctional, sheltered childhood to his own version of maturity, which involves following his dream, regardless of what common sense (and others) tells you otherwise. It's not an easy book to read, and somewhat depressing and tedious at times, but essentially a well-written look into a unique individual's mind and heart. I give it four stars out of five.

Posted by AlanChinWriter at 12:48 AM 2 comments: 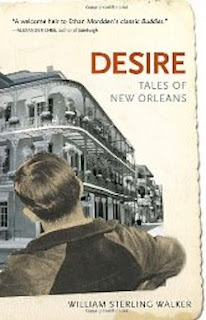 
Over the years, there are many gay stories that have been based in New Orleans, and for good reason. It is a unique city, with a highly diverse population which tends to embrace differences, forgive misdeeds and does what is necessary to live to one's potential. These factors are all present in this anthology of nine short stories by the author, dealing with New Orleans, before Hurricane Katrina's devastation.

Though none of the stories are dependent on any other, there are some common themes and situations, and some of the characters referenced may seem to coincide. While all are about men from New Orleans, some gay and some not, two of the stories actually take place in New York City, with characters that clearly miss their original roots. The stories feature a variety of blue collar and white collar individuals, including some on the fringes of society, in any city. There are equal doses of wit, longing, poignancy, hope, seduction and loss, all woven together by this talented author. I give it a full five stars out of five.

Posted by AlanChinWriter at 6:22 PM No comments: 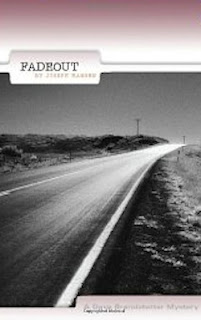 Dave Brandstetter is an insurance company investigator in charge of looking into difficult claims. When radio personality Fox Olson’s convertible plunges off a mountain road into a river, Brandstetter is called in to determine why nobody can find the body. Was it an accident? Suicide? Murder? Or is Fox alive and in hiding? And how does all this relate to the sudden reappearance of Olson’s war buddy.

Brandstetter has his own demons to fight. He has recently lost his lover, and this is his first case after coming back onto the job after a number of months off to get over what he can’t get over.

Olson lived in a small western town, one where everyone seemed to love him, and also where everyone has secrets. Brandstetter must expose all those secrets in order to uncover the truth and solve the case.

In 1972 Joseph Hansen published the first of what would grow to twenty-five novels, twelve of which feature Dave Brandstetter as the hard edged, openly gay, thinking man’s investigator. Brandstetter was not the first gay sleuth, but he was the first healthy, gay detective that was utterly comfortable with his sexuality. He is as real a person as a novel character can be.

The writing and pacing are superb. Hansen has been compared to Hammett, Ross MacDonald, and Chandler, and for good reasons. Although there are some plot twists that are obvious, there are plenty of surprises that keep the reader guessing to the last few pages.

It is a moving, interesting, sure-handed book on every level.

After four decades, every aspect of this story and the writing holds up. Hansen’s work is destined to be deemed classic. This is a story I can highly recommend to all readers who enjoy a good mystery.

Posted by AlanChinWriter at 12:52 AM No comments:

A Strange And Separte People A Play by Jon Marans 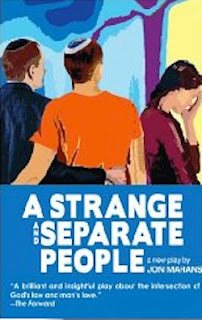 
In this new play, which received critic praise in its limited NYC run last year, we meet Jay and Phyllis Berman, a 30-something (mostly) Orthodox Jewish couple in New York City, raising their autistic son. Their life gets a bit spicy when Stuart Weinstein, a handsome and busy doctor, meets with Phyllis to arrange for her to cater a party he is planning. Phyllis is somewhat attracted to Stuart passion and charisma. She is also fascinated by the fact that he is gay, but doesn't see that as a contradiction to his faith, and enjoys discussing that with him at length. When Phyllis invites Stuart to have dinner with the two of them, it's obvious that there is a tension between the two men, one that signals a potential rift in their otherwise happy marriage.

Besides the text of the play, complete with stage directions and notes, the book contains an essay on the faith's official stand on homosexuality, as well as personal essays from two Jewish men, one who went through the faith's ex-gay movement, and another who has learned to embrace both his religion and being gay. Also included are details on the production history of the play, with photos.

Although I usually avoid reading plays, this one held my interest, and I found it somewhat enlightening. Likely not for everyone, and I'll give it four stars out of five.

Posted by AlanChinWriter at 6:12 PM 2 comments: 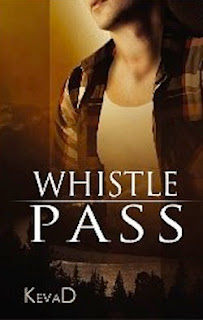 Charlie Harris is looking for a lost love. He comes to Whistle Pass to reunite with his war buddy, Roger Black, who he had shared some intimate moments with before the war in Europe ended. It’s been ten years since their romance, and Charlie doesn’t know what to expect. All he knows is, his buddy has asked for help. What he finds is a mystery, a dangerous and confusing situation. Roger Black is no longer the lover in Charlie’s memories. He is now a married, hard-bitten political schemer who uses people, including Charlie.

Charlie luckily finds someone to help him pull the pieces together, Gabe Kasper, the dandy who manages the town’s only hotel. But helping Charlie places Gabe’s life in danger. Charlie is backed into a corner and must fight for his life, but will he honor the lover of his memories or protect this new hotel manager?

This story has a number of twists and turns, enough to keep any reader guessing. Its strength, I believe, is in the depth of the two main characters, Charlie and Gabe. They are both damaged goods, each in their own way. This is a romance, so it was no surprise that these two developed feelings for each other. The surprise came from the believable way their relationship developed.

This is a story that started off very strong with several intriguing threads. As the plot developed, however, I felt the characters made several unrealistic choices, which kept pulling me out of the story to scratch my head. Those choices sometimes felt forced to advance the plot, and other times simply peaked my interest because it was not what I was expecting.

The author’s descriptive prose often crosses the line into melodrama, and I found myself wishing the author would have toned down the language. The author is also fond of telling the story via the characters thoughts, as apposed to showing the story through action.

For readers who enjoy MM romance with a heavy dash of suspense thrown into the mix, I can recommend this story. 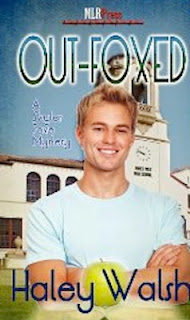 Young high school teacher Skyler Foxe is back, newly "outed" (along with his boyfriend, teacher/assistant coach Keith Fletcher, who convinces him to dance with him at a school function.) Shortly thereafter, he learns that Keith has been keeping a big secret from him, and breaks off their relationship, just as he needs support to face the scrutiny resulting from the "outing." And Skyler also must contend with his mother, to whom the revelation was a bit of a shock.

Meanwhile, the ongoing series of injuries and mysterious events at the school have local police, and even the FBI, searching for some kind of criminal activity, possibly involving the football coach and other faculty members. As usual, Skyler gets involved, in pursuing possible leads he feels the professionals are not properly investigating, and finds himself in peril more than once. Thankfully, he has Keith, his best female friend Detective Sidney Feldman, and a trio of his "ex" lovers who know him well, and try to save him from himself. 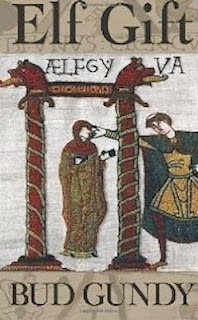 In current day San Francisco, Sister Mary Rose Harlowe and Broderick Ellis are brought together by a mysterious old woman to solve a mystery that began in Ireland at the time of the potato famine. Mary Rose and Broderick find themselves in a mad rush to get answers that can prevent disasters and save countless lives. What they uncover is truly remarkable, secret powers that have been in play for centuries. It is something that the holy authorities in Rome will do anything to crush. But as remarkable as this mystery is, Mary Rose and Broderick discover that the most shocking revelation is about their own lives.

Bud Gundy has created a truly innovative romp though history, captured in a voice that is magical and amusing. The plot is chock full of twists and turns and the two protagonist must use their considerable wits to maneuver between the landmines.

Like most good stories, it is the characters that make this tale so interesting. Sister Mary Rose is a devout nun, but she is also a headstrong woman who will not be pushed around by her ‘superiors’. Broderick is a fun-loving gay atheist. Together, they clash in a fun way, much like the Odd Couple or Butch Cassidy and the Sundance Kid.

The plot is both serious and fanciful. It is fast paced and there are times when I couldn’t read it fast enough. It is a page-turner with a surprise ending.

There are times in the story when Sister Mary Rose climbs onto her soapbox to convince Broderick there is a holy power, and to me (a non-Christian) it sounded too much like preaching. I would have preferred that the author have gotten his point across in more subtle ways.

This is a wonderful read that I highly recommend to all readers who love well-drawn characters and a superb story.

Posted by AlanChinWriter at 6:41 PM No comments: