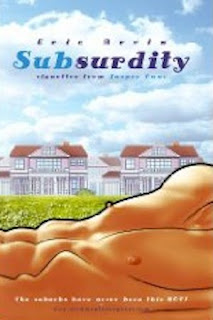 
Jasper Lane is a well-trimmed, upper-middleclass neighborhood with a mixture of gay, straight, liberal, conservative, young, and old people, all a bit wacky and all reaching for the brass ring. There is not one central character, but rather everyone seems to play a part with equal billing. The story jumps from house to house, neighbor to neighbor as their stories intertwine, and in some cases collide. There is Cassie Bloom, the grand dame who likes to throw gay-porn parties and hides a deadly secret. There is Melinda Gold, the religious overbearing mother to son Patrick, who is trying to cut those apron strings. There is Steve, husband to Sandy, who gets laid off and ends up performing gay-for-pay porn to pay the bills. And there is Rick Cooper, the gay boy who just moved in with the neighborhood token gays, David, Cliff and Terrence. There is even a dog who goes by the name of Gay Hound.

This is a fast paced, easy read. It’s the kind of carefree read people take to the beach. It is often interesting, often silly and often funny. The story jumps from one character to another every three or four pages, of which there are about seven or eight main characters to follow. These characters often stumble into interesting situations, but unfortunately, because the story kept switching characters as it breezed along, I never got the impression that any of these characters had any real depth. Most of them were somewhat believable, and some, like Patrick (the young boy trying to pull way from his overbearing mother) were sympathetic. There were a few that we’re not so believable and neither were their situations.

There were also a couple of plot points, the murder mystery for instance, that simply didn’t work for me. There was simply not enough effort devoted to making it interesting or to impact the story in a meaningful way.

This is certainly not the kind of character driven, thought provoking book that I normally enjoy. Twenty pages into it I was rolling my eyes and wondering if I should continue. However, I must say that it did grab me, and I wanted to find out what happened to a few of these wacky characters. I do wish the author would have devoted more time into giving these characters more depth, however, I walked away from this one smiling.

If you are looking for gay “Literature” then I suggest you keep looking. If you simply want a fast and fun read that will lift your spirits, they I suggest you give Subsurdity a try.
Posted by AlanChinWriter at 7:14 PM No comments: 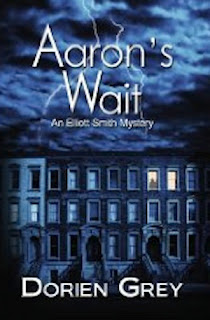 Aaron’s Wait is the second book in the Elliott Smith Mystery series. The main character, Elliott, is one of the dullest people on the planet – he’s got loads of money, good looks, a caring boyfriend, a hobby of restoring old apartment houses – yet he is placed in an interesting situation, he is on a first name basis with a ghost, John. Together, Elliott and John attempt to solve a mystery involving yet another ghost who is haunting the building that Elliott is renovating. This proves rather difficult because the other ghost, Aaron, doesn’t realize he’s dead and can’t really communicate effectively with either Elliott or John. Readers who enjoyed the first Elliott Smith mystery, His Name Is John, should feel a sense of déjà vu about now. At times I felt that the elements in the two stories were a bit too similar.

What Elliott and John discover, is that Aaron has been dead for four years, and during that time he has been waiting for the return of his lover, Bill, who is also dead. In order to set Aaron free from waiting for eternity, Elliott and John must solve the mystery of how Aaron’s lover died, so that Aaron can finally move on, or rest in peace, or whatever it is that spirits do.

As with most of the Dorien Grey books I’ve read, this one is not to be rushed. The level of rich detail in the life of Elliott Smith makes for slow, sometimes glacial, pacing, yet it is seldom a problem because the author’s voice keeps the story absorbing. Fans of Dorien Grey will no doubt enjoy these well-written scenes and lush descriptions. Most of the characters are likable and feel real. The author skillfully keeps the reader guessing until the last puzzle piece falls into place.

There were two issues that made me not enjoy this story as much as the first Elliott Smith mystery. The first had to do with caring about what happens to a ghost that has been dead for four years. I simply failed to care about his situation, having been dead for that long a time. Part of that not caring came because the reader never really has direct contact with Aaron, but always experiences him through the words of John.

My second issue is a larger drawback. Of the two main characters, Elliott and John, one is a ghost. He has no physical form. Therefore, the reader can’t visualize him and he performs no physical actions. He’s simply a voice in Elliott’s head. Because of that, he comes off as one-dimensional. His only role seems to be a go-between for Elliott and Aaron. Because of this, Aaron has to carry the story, which he mostly does, but I was left wanting more. I feel that if the author continues writing stories with this paranormal duo, he needs to find a way to give John more depth, give him a much larger role to play, and give him the ability to affect physical events.

My two concerns did not stop me from enjoying this read, and I feel that anyone who loves mysteries will enjoy this story as well. I can recommend this story without hesitation.