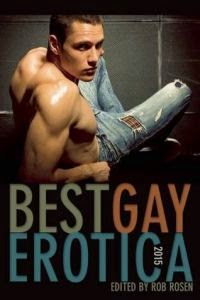 It takes real balls for an editor to lead off his gay erotica anthology with a story that satirizes the genre itself. I say “balls,” but I admit that as a frequent editor of lesbian erotica anthologies I’d be tempted to do the same (or rather the equivalent) if I had as brilliant a piece to work with as “Different Strokes” by Richard Michaels (although I wouldn’t then claim to have “real balls,” just figurative ones. Maybe.) Michaels pulls off the tricky feat of being outrageously witty and still providing the nuts and bolts (and grease) to construct down-and-dirty sex scenes. Multiples sex scenes, in fact, or segments thereof, one after the other in a wild choose-your-own-adventure fuckfest. He piles cliché upon metaphor upon over-the-top image, switching imaginary partners from robust black stud to collegiate blond and still maintaining a convincing sexual tension between the writer/narrator and the reader in their shared quest for an ultimately rewarding wank-off. There are so many gems of descriptive overdrive here that it’s hard to choose just one quotation, but here’s a fairly tame taste:
…even with the deep-throating technique that all we narrators of these hyperbolic flights of erotica learned the moment we wrote our first word, I could not ingest all of his munificence…like driving a truck through a tunnel that’s almost too small, steering this truck with its precious cargo on the glistening highway of my tongue until the front of the cab, with its retracted grillwork of flesh, struck a roadblock and could go no farther, so I put the truck into reverse and backed it up, and then metaphor breaks apart, as it always does in these stories, and we get back to basics: I sucked his dick.
In case you can’t tell, I loved this story. The danger of a lead-off like this, though, is that the reader becomes sensitized to overblown prose and may be tempted to laugh rather than pant if other writers in the book get into a formulaic rut. I shouldn’t have worried, as it turns out, since, on the whole, all the stories are well-written, and some are memorable even aside from the sexual content. A few do get rather deeply into a morass of metaphors, but erotica readers develop the capacity to swallow plenty of that without gagging, so I’m not really complaining.
Onward to other stories that I found memorable.  “Choice” by Rhidian Brenig Jones features a pair of likeable guys from Poland working in the UK, and their more-than-friendship with a young Catholic priest. “Feygele” by Alex Stitt mingles ornithological metaphors with the talents of a street firedancer in London. Gregory L. Norris’s “The Man In Black” is a science fictional tale wherein a shapeshifting alien gives the protagonist what he’s longed for from the various “men’s men, manly men” in his life who would never give him more than friendship. “Like Magic” by Salome Wilde involves a young man with a crush on a has-been vaudeville magician, not a very appealing object of desire, so readers seeking a vicarious erotic charge may not be satisfied, but the writing is excellent. Dale Chase’s “Nothing to Lose” is a complex and nuanced study of gay weddings, determinedly casual sex, and working through loss to healing. “From Here to There” by Xavier Axelson deals tangentially with a gay wedding, but what you’re likely to remember best is a fine use for lobster butter.
The final story, “Super Service” by Michael Roberts, is right up there with the first piece, “Different Strokes.” There’s a similar sly wit, and a knowing embrace of cliché, in this case the time-honored scenario of workmen coming to a home to fix plumbing, paint walls, whatever—three of them here—and using the tools in their tool boxes as well as those below the tool belt. The narrator stakes his tongue-in-cheek claim to upper-class erudition right away:
The vision in front of me wore an immaculately white crew-neck T-shirt that hugged his chest as if it and the torso had fallen in love and intended to cling to each other as closely as possible. I couldn’t blame the T-shirt. A fanciful image, peut-êtrè, but the sight made me absolutely giddy.
Later he stakes his claim to ordinary humanity by admitting that he can’t manage to get through the Henry James novel he keeps leaving behind in his chair and then sitting on. A sexy romp with attitude, similar enough in tone to “Different Strokes” that I wondered whether Michael Roberts and Richard Michaels were, perhaps, different sides of the same pseudonymous coin, but I’ll never know, and it doesn’t matter.      Now that I’ve been scrolling down the table of contents, I realize that all of the stories are memorable in their way, each one worthy of being someone’s favorite. As so often happens in reviewing, I’m not the target audience for the erotic aspects of Best Gay Erotica, so there’s no reason to be swayed by my opinion on anything besides the quality of the writing. Some appealed to me more than others on that basis, but I can wholeheartedly recommend the book as a whole, with no if, ands, or peut-êtrès. (Admit it, you thought I was going make an obvious pun there. Shame on you.)

Posted by AlanChinWriter at 6:12 PM No comments: