The Lonely War by Alan Chin 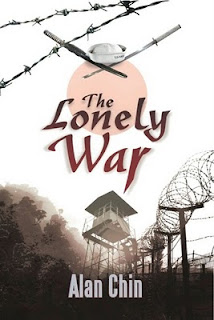 A New Fan of Love and War

I've never been a fan of war stories, but if I thought more of them were anything like Alan Chin's The Lonely War, I would seriously re-evaluate the basis for my longstanding aversion to the genre. In this heartrending and ultimately affirming World War II tale of enlisted sailor Andrew Waters and the American naval officer he falls in love with, all the presumably crucial elements of a good war story are present: interesting historical detail, horrific human drama and tragic loss, wrenching conflict, raging prejudice, and poignant camaraderie.

In The Lonely War, Andy, an enlisted Chinese-American sailor--and a Buddhist--falls hard and fast for Lieutenant Nathan Mitchell, his executive officer, setting into motion a series of events with far reaching consequences not only for them but for the entire crew of the USS Pilgrim. When the sailors become POWs in Changi, a notoriously brutal Japanese prison camp, Andy is faced with unspeakable challenges and with a dilemma that tests his own inner resources and extraordinary courage, in order to save the life of his beloved.

Any war buff able and willing to reconcile a turbulent World War II scenario with a powerful love story between men will find plenty of gruesome and vividly detailed action, but what's also here is a riveting story of passion and sacrifice in the service of friendship and love. It's a tribute to Alan Chin's talent as an author that he can simultaneously provide so much rich and painstakingly researched detail and never once let it detract from the romance and personal awakening that is at the heart of this remarkable book.

This story made turning off my Kindle at night one of the biggest challenges of my day for several days, and although I may not start reading war stories as a result of having read The Lonely War, I will most certainly be reading much more by Alan Chin. 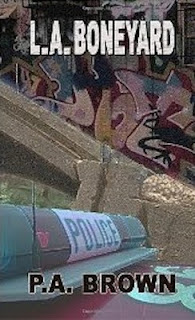 Detective David Eric Laine has a new partner at work and a string of beautiful, pregnant women who turn up murdered. The partner, Jairo, a sexy young Latino who has a wife and kids, has a crush on David. As the two work together, the case unfolds into a situation that involves prostitution, human trafficking, and illegal arms sales to street gangs. If dealing with these issues weren’t bad enough, Jairo’s heavy flirtations become a constant distraction for David. And David, not as strong as he likes to think, is sorely tempted.

That occupies David’s days while his lover, Christopher Bellamere, does everything possible to make David comfortable at home. Chris and Dave have been together for four years, but can their relationship stand the test of Jairo trying to steal David away? And can David hold his relationship together long enough to solve the crime? David seems to be doing fine until he lets down his guard, and a moment of weakness threatens to blow his whole world away.

This is a tense, complex, well-written tale that focuses as much on the crumbling relationship between David and Chris as it does on solving the crime, which is as it should be. David and Chris are great characters, although I wish Chris could have had more page time to deepen his character another notch or two. The complexity of their relationship drew me into their world, and the fact that they are opposites kept me interested in their interactions. I was rooting for them all the way. Although I must say that there were places where the circumstances in the relationship seemed a bit contrived, but certainly not enough to detract from my enjoyment of the story.

The writing is strong, gritty, and the procedural detail is top notch. Brown skillfully weaved together a tapestry of forensics and solid police work to create an interesting story, even as the complexity continued to grow far beyond my expectations. Yet, for all its complexity, there were few dropped threads, and the pace remained even with plenty of action and suspense that kept me turning pages.

This is the third of a series with David and Chris, and unfortunately I have not read the first two, but I was able to easily understand all the nuances of David’s work and home life. This book stands well on its own. My one complaint about this entertaining story is that I felt the resolutions, both for solving the crime and for David and Chris’s relationship, was too hastily wrapped up after such a long drawn out labyrinth of twists and turns. It felt a bit too easy, or perhaps I wanted the story to keep going longer.

Overall this is an engaging read that I highly recommend.