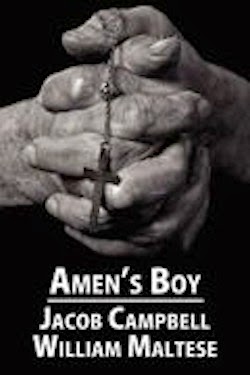 The reviewer Amos Lassen recently introduced me--via Facebook--to a writer called Jacob Campbell, who lives in Louisiana and writes confessional “fiction” about his time as a minor seminarian, and later, as an out-gay resident of the French Quarter.
The relationship between Campbell and myself has been rewarding from an artistic perspective (we both write about similar themes) and it’s also exposed me to incredible works of queer fiction: Campbell’s own. First among these has to be his novel Amen’s Boy, which is similar in many ways to Joyce’s Portrait of the Artist as a Young Man, only queer and just as powerful.
Despite being labeled as a “fictionalized memoir” about sexual abuse in the Roman Catholic Church, Amen’s Boy isn’t simply a book about abuse. If it were merely a novelization of current events, it could hardly deserve to be called “literature”; and Amen’s Boy is a highly “literary” novel, as I’ll explain.
The abuse described in the novel--mainly perpetrated by priests against boys or by teenagers against younger boys--plays a major role in the adolescent narrator’s psycho-sexual and spiritual evolution. But it never comes to define the novel as simply a “text about abuse.”
Rather than understanding Amen’s Boy through the lens of current events--which many of its readers, on Amazon and elsewhere, seem to want to do--encouraged by the publisher and, perhaps, their own experiences--I think it’s important to respect the book’s integrity and read it for what it is: a literary narrative that draws on elements of mysticism, modernism, and coming-of-age, gay literature.
One aspect of the book’s “literariness” that transcends the documentary genre is the powerful voice of the boy-narrator, Thaddeus Merton (“Tad,” or “Tadpole,” for short), who experiences everything through the lens of a kind of transcendent, Joycean aestheticism. Thaddeus’ abuse is explored, at first, from a child’s point of view–not capable of deep reflection–and in a way that focuses on rich, sensory and instinctual experiences. It’s only later in the novel that a series of epiphanies and self-revelations reveals the true nature of what has happened to him.
Whereas Stephen Dedalus in A Portrait of the Artist as a Young Man seems conditioned in his Catholicism--and Joyce’s rejection of his church is conclusive at the end of the novel--Thaddeus seems to live his faith profoundly and Campbell never opts for black or white answers. This is reflected in the ending of the novel, which could represent a spiritual redemption for Thaddeus--the rejuvenation of his vocation–or a psychotic breakdown.
By allowing spirituality to remain a possibility for Thaddeus, and by refusing to “overcome” religiosity in favor of pure aestheticism, as Joyce does for Stephen, Campbell creates a novel that lends itself just as much to spiritual autobiography as it does to modernism.
At times, Thaddeus’ first-person narrative transforms into a highly-wrought, mystical text--akin to the writings of Teresa of Avila or John of the Cross rather than a gay novel. And perhaps this is the most post-modern thing about the novel: the difficulty one experiences trying to explain it in terms of generic conventions and its refusal to give up exactly what its ending means.
The author shows us how an adolescent can find a damaging comfort in the “secret closeness” of an abusive priest–in this case, a sad, balding character called Fr. Terry. The insidious, soothing intimacy Thaddeus shares with Fr. Terry is experienced as a grateful escape from the brutality he suffers at home–at the hands of his sadistic brother and his weak parents.
This is true not only of the abusive relationship with the priest but of Thaddeus’ entire relationship with his church, which includes his duties as an altar server, and his conversations with Fr. Terry in the Sacrament of Reconciliation–which the priest uses, shamefully, to groom the boy for both sex and the priesthood.
This paradoxical blending of heavenly and hellish themes culminates in the author’s haunting portrayal of “Mettray,” a minor seminary where Thaddeus pursues his vocation to the priesthood.
Named after the penal colony in which Jean Genet was incarcerated for 3 years in the 1920s, the Mettray of Amen’s Boy becomes Thaddeus’ home for an equivalent 3 years. Its name evokes the irony that a child can experience “home” as both a heaven and a hell.
Similar to Proust’s “Combray,” Mettray is Campbell’s greatest achievement, if only because the descriptions of the seminary ground Amen’s Boy with such a vivid sense of place one often feels transported while reading, returning with a sense of sadness about the horrors that occur there and, confusingly, with a longing for the joys.
When Amen’s Boy is over, the aura of Mettray remains. You may even wish to return there–despite the fact that horrible things occurred. For nothing is black and white at Mettray: the soul-crushing brutality one experiences there exists side by side with the possibility of redemption.