The Hardest Thing: A Dan Stagg Mystery by James Lear 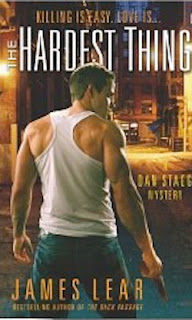 If you have read author James Lear before, you know he is a prolific erotica writer, and you also have come to know is how effortlessly Lear can reach out, grip you buy the neck and pull you into his story before you have a chance to realize what is happening. THE HARDEST THING: A DAN STAGG MYSTERY proves no different, and if I may dare say, one helluva thrilling ride.
The novel has all the elements a good mystery, suspense/thriller should have; a hard-ass, down on his luck ex-Marine with violent tendencies robbed of a stellar twelve year career because of “Don’t Ask, Don’t Tell”, an well-connected organized crime connection abled by dirty cops and even shadier men, an extraordinarily sexy and talented boy-toy, a bunch of ready cash…and lots of sex!!
Did I say lots of sex? THE HARDEST THING is the first Dan Stagg mystery to be released featuring the hardened ex-marine, and Lear has done a superb job developing such a damaged character readers will quickly fall for, and cheer on as he batters his way through brutal circumstances to stay alive, and keep his human “package” breathing. Only thing he didn’t count on ever again, never hoped for again was to fall in love.
But for all the loose zipper, tough talking, heavy handed bravado, Stagg is a very likeable protagonist, one that reminded this reader on more than one occasion of more mainstream hetero heroes like Lee Child’s “Jack Reacher”, Barry Eisler’s “John Rain”, or David Baldacci’s “Lee Adams”.
One thing is sure, this reader is eagerly awaiting the next Dan Stagg mystery. 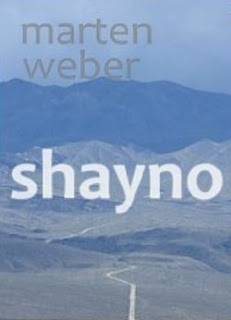 Shayno is the story of two men, both in search of something they think Shayno, a hunk who immigrated to America from Australia, can provide. What neither of them know is that Shayno is a man incapable of returning affection. He slowly leads his prey down a path that just keeps getting darker and more dangerous, toying with his prey in order to glorify his fragile ego.

The first protagonist is a middle-aged technician working in Silicon Valley who has become bored with his job, his friends, his life. He wants to find love and adventure, and when a sexy (albeit straight) hunk pays attention to him at the gym, he follows that hunk like the Pied Piper.

The second protagonist, Kevin, is a young Australian surfer. He’s on a journey to find Shayno, whom he knew and fell in love with before Shayno flew to America.

Mr. Weber shows an exceptional talent at creating gripping scenes, even though he uses rather unorthodox ways of writing prose that make it difficult for the reader.

The characters he creates in this novel are often placed in interesting situations, but overall I found all three to be rather stupid, a bit cliché, and unlikeable. Several times, the author turns his characters into mere mouthpieces to spout his views. I couldn’t connect with the characters; therefore, I never became captivated by their story.

This is not your typical MM romance. It is a study of how a person can be led, step by step, into a dangerous situation, and also how people can be enthralled by danger. It’s well worth a look if you’re searching for something unusual.

Posted by AlanChinWriter at 5:08 PM No comments: 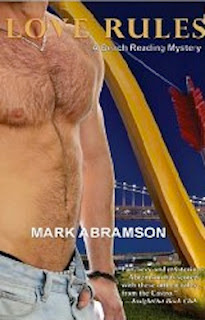 In this, the seventh book in Abramson's "Beach Reading" series, the gang is in a period of transition. Artie and his lover Arturo are taking a leave from their Castro restaurant, for Artie's comeback singing tour. Aunt Ruth is back behind the bar, helping to keep an eye on things while they are gone, although she would much rather be spending leisure evenings with her still husband. And everyone in the Castro is buzzing about a daring series of armed robberies, by a duo who seems to be very good at what they do.

I've been a big fan of this series since its inception, and it is always good to get to visit with Abramson's realistic, fully-nuanced characters. I was also happy to see further development of some secondary characters introduced in earlier books. Overall, however, I have to admit I found this one to be a bit weak in storyline, compared to the others, and hope it is just a temporary misstep. Overall, I still give it four stars out of five.

You Are Here by Chris Delyani 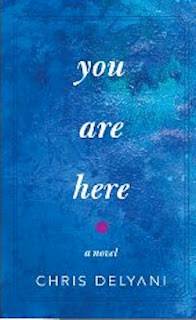 Peter Bankston is a newcomer to San Francisco, transplanted from the Midwest. He’s a struggling artist, young and uncertain, and overwhelmed by the city’s gay scene. He’s longing for love, but prefers to focus on his artistic endeavors rather than take a chance on relationships.

Peter works in a coffee shop and dreams of being a painter. His search for happiness becomes entwined with the lives of three gay men: Peter’s vindictive landlord Jeff King; Miles Bettencort who obsesses about the lover who walked out on him shortly before they were to be married; and handsome Nick Katsaris, who seems to have everything going for him. The author uses these characters to weave a complex romance, using San Francisco as a backdrop.

In Peter Bankston, Delyani has created a protagonist with the kind of innocence and purity that can’t help but affect everyone who comes within his gravitational pull, including the reader.  This is a romance, yet it’s also Peter’s coming of age story.

This is a typical romance, with few surprises in the plot. It is not particularly well written, however, it does have interesting characters, and several emotional scenes that kept me reading.

One of the most enjoyable elements of this story is the setting, San Francisco, and the author gives first-hand knowledge of the city. It was like being back home, walking the streets and enjoying all the shops and restaurants in my favorite parts of town.

This coming-of-age/romance story, I feel, is a good read for young gay men trying to navigate the same turmoil and pitfalls as the lead character. I think younger people can appreciate this story, and learn from it. 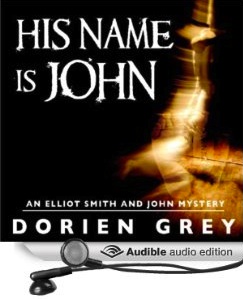 In His Name Is John, prolific author Dorien Grey has achieved the rarity few writers enjoy, which is developing a solid first novel in another series daringly different than Grey’s wildly popular Dick Hardesty private investor mysteries.
Once again, Grey has created a colorful cast of characters we love and despise, beginning with the introduction of a middle-age Elliott Smith, a rather mild-mannered man whose vocation is real estate development in the Chicago area. Elliott and his rather motherly sister are siblings of wealthy parents who appear more interested in traveling the world and keeping up appearances than in spending time with their children and grandchildren. Although he is from wealth and privilege, Elliott has achieved wealth of his own by investing in historical, architecturally significant buildings to rehab and sell for profit. A great backstory that provides a solid foundation for the novel that quickly bursts to the forefront when a decades old skeleton is discovered behind a brick wall in the basement of Elliott’s latest project.
But, I am getting ahead of myself as the novel begins with Elliott waking up in the ER with a serious head injury…and quickly learns he is not alone. Another man in emergency the same time as Elliott has died and his spirit (which Elliott cannot see) butknows is there has locked onto Elliott for reasons unknown. Once on the mend, Elliott feels a sense of obligation to help the “spirit”, who knows only that his name is “John”, learn who the man was and how he had died.
Dorien Grey has written an extraordinarily inventive, highly imaginative mystery within a mystery, complete with well-developed characters and tightly plotted prose. The incredible talent of narrator, Jim Hickey, makes this already terrific novel an even more enjoyable listen. Those listening to the audio version of His Name Is John will quickly slip into a comfortable zone hearing Hickey’s words, the perfect choice of narrator for this novel, not to mention lending the right voice to Elliott Smith’s character.
I am looking forward to reading more Elliott Smith mysteries and hope Grey continues with Jim Hickey as narrator for future audio releases.
http://www.doriengrey.com/

Posted by AlanChinWriter at 12:35 PM No comments: