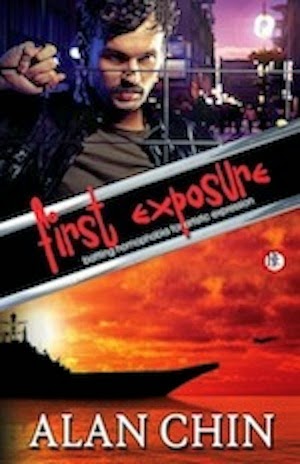 Blurb:
Straight, married Petty Officer Second Class Skyler Thompson battles homophobia from his navy buddies, the military, and his wife when he takes a job creating flower arrangements at a gay-owned florist. But rather than yield to pressure and quit, he refuses to give up the joy of creating beautiful arrangements, battling homophobia for artistic expression. His dream is to leave the navy and open his own florist shop.

Ezra Dumphy—his shipmates call him Dumpy because of his obesity—is a gay sailor who likes to dress in drag. He is shunned by his shipmates, tragically lonely, and uses drugs to cope with his solitude. What he wants more than anything is someone to share his life with.

Can these two men, opposites in every way, help each other achieve their dreams?

My View:
“Life, friendship, love, was a crapshoot.”
After just two chapters into this book, I had bought into this story, to Ezra and Skylar, to their lives, to this author’s writing.

On the surface of things, it may appear like these are trope-worn characters with trope-worn backgrounds, but this is not the case. Chin has given these people lives through their struggles and the crutches with which they try to deal with those struggles. He’s given to them talents and the joy they feel when they get lost in them. The level of emotional honesty is unavoidable, it’s so real.

Ezra and Skylar share a connection, though through different media. The result is a door that opens practically on its own.

To him, art was somehow sacred, the way you gaze up at a night sky and wonder if you’re standing on an electron that revolves around a proton in a series of infinite universes, and suddenly your mind expands and you experience your reality in a new and more significant light.

Anyone who has ever gotten lost while looking at a photograph or watching a playing musician or reading a passage in a poem, or anything of the like, will understand that feeling. There’s no turning back from it, either.

This writer has a healthy comfort level with language and knows how to use it. It’s such an interesting juxtaposition, his use of what I can only call celebratory prose in writing about difficult things taking place in complicated, uneasy lives. The styles aren’t all similar but I got the same feeling from his writing as I do when reading Harper Fox or Edmond Manning. The words the words the words.

There are a few cases of what feels like overindulgence in that language, but when it’s this enjoyable, I let it go like a two-day old bagel.

At some point during all of this, I realized I wouldn’t be able to ever forget these characters. Beautiful, sweet, carrying their burdens, frightened, hopeful and working to survive. Again, it’s the writing. It brings inspiration and darkness to life.

“Flowers are more delicate, more ethereal than the plants they emerge from, and they have scent, which is amorphous. They are the bridge between the physical and the formless, body and spirit. Flowers are a metamorphosis of the plant in the same way spiritual awakening is to a human.”

Hollister, one of the supporting characters and co-owner of the flower shop with his partner Miguel, says this to Skylar as they work on creating some arrangements for an event. This is one of many, many turns in this story for multiple characters. I have to say, as well, that in this kind of story, I almost don’t like to use the term “supporting”, as if they aren’t important all on their own. Believe me, every character in this book is meant to be there.

Unpredictable characters making unpredictable choices. I like that I didn’t always agree with those choices or that they didn’t always feel right for the characters. Whenever that happened, it forced me to reexamine my understanding of them. How great is that? Highly involved reading is the name of the game here. Love it.
There are all types of relationships explored in this story: friendship, co-workers, married couples, child/parent, long-time companions, lovers, and all of them feel very real. Real means emotional, relatable, they made me think, stayed with me, and I couldn’t wait to get back to reading about them each day.

“Honey, did you ever have a kite pull you right off the ground when you were a kid? If so, then you know the thrill I get when I work with flowers.”

There’s a nostalgic feel to this book. I’m not even sure how I can “prove” that, except that it does. Maybe it’s the overall style of the storytelling Chin has. I think that’s what it is. I want more.

This is not an easy read given the wide array of tangled, difficult subjects examined and experiences revealed. Despite all of that, I felt peaceful when I was finished. Looking back at everything that happened, everything these characters put themselves through, I never would have predicted peace being my final reaction. Just like the story itself, it was unpredictable.

This is a novel that, frankly, defies categorization. It left me utterly satisfied. It’s very personal. And that last scene? I still can’t find the words to adequately describe how it made me feel, all of these days later. I do know that I want more of Ezra’s story.

I could not recommend this book more even if ‘more’ meant… more. Read it.

I would like to thank the publisher for providing me with the eARC of this title in exchange for my honest opinion.