One Last Lie by Rob Kaufman 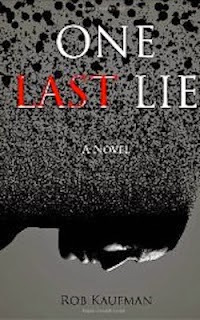 One Last Lie by Rob Kaufman in a word is awesome, an incredible psychological thriller that will have the reader hanging on the edge during the explosive and thrilling final pages. Which is odd, since the reader knows a very important fact very early on that drives the novel - and yet, I found myself shocked and stunned by the actual event. To say that I was affected is an understatement.

The first half of the tense and romantic novel seems tame at best, a love story between two men wanting desperately to have a child and the one driving this dream is the one who is sterile due to a previous bout with cancer, of which he is a survivor.

Kaufman is a master of romantic suspense. The novel is set in the beautiful, romantic Westport, Connecticut. The subject - gay couple wanting to father and raise a child - popular in today's gay culture. The protagonists, Jonathan Beckett and dashing Philip Stone, are successful, love their careers, very wealthy and can afford the finer things in life - and to fulfill their dream of having a child.

In comes Angela, an old college friend – err, girlfriend – of Philip’s, squirreling her way into Philip and Jonathan’s lives, ironically offering what the boys are looking for – someone to carry Jonathan’s child via artificial insemination. Angela experiences a Jekyll-Hyde complex, able to turn on a dime with both her low-life moronic boyfriend, Tommy, and her brooding – and easily manipulated -- best friend, June. Angela manipulates anyone around her that she feels able to advance her agenda, an agenda set into motion the moment Angela picked up and moved to Connecticut, without invitation, to assist the boys in having a child with her via artificial insemination.

Kaufman’s gift as a writer is detailed within the sharp dialog, vivid imagery, skillful flashbacks, and well-rounded multidimensional character portrayals, but his inherit talent lay in his remarkable ability to craft a spell-bounding story, laid out for the reader in a way to have you cheering for the good guys and demonizing the psychos.

There are critical clues dropped within the novel that are thrilling, yet disturbing yet the same as Kaufman’s hurls the readers toward a well-crafted, suspenseful climax that will leave some breathless and others – like me- angry. Yes, I said it; angry. The reason for my anger is simple: I didn’t want the ending to happen as it did yet I KNEW what the ending would be and still, the author managed to shock me.

Angela is neurotic, psychotic and delusional – all required traits in portraying the villainess she becomes. Several characters that came before her came to mind as I learned more and more about her character, such as “Alex Forrest” (portrayed stunningly by Glenn Close in “Fatal Attraction”), or Annie Wilkes in Stephen King’s “Misery” (portrayed in film by the astounding Kathy Bates), even the sultry Rebecca de Mornay’s portrayal of Peyton Flanders in “The Hand That Rocks The Cradle”.

The malicious plot Kaufman’s Angela devises years before putting the such an evil plan into motion upon signing the co-parenting legal contract with Jonathan’s and Philip’s attorney.

But, I digress…Kaufman has created a spectacular psychological thriller that is sure to stun – is that the right word? – Readers of the genre. [Book:One Last Lie|14624158] is chock full of tense drama, betrayal, lies, compassion and violence; all the marks of an excellent thriller.

My only complaint is likely due to the HTML uploading issues unique to Amazon’s conversion technology for uploading e-books. The reader can become confused with the sudden backward or forward in time breaks without the benefit of section dividers. However, these small inadequacies are easily overlooked.

Ultimately, Kaufman has created a “must-read” novel for anyone searching for a kick-ass psychological thriller with a strong romantic theme. [Book:One Last Lie|14624158] will suck you in and won’t release you until the shocking ending, indeed the ‘one last lie’.