Remembrance of Things I Forgot by Bob Smith 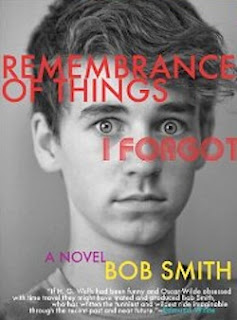 In 2006 comic book dealer John Sherkston has decided to break up with his physicist boyfriend, Taylor Esgard, on the very day Taylor announces he’s finally perfected a time travel machine for the U.S government. John travels back to 1986, where he encounters “Junior,” his younger, more innocent self. When Junior starts to flirt, John wonders how to reveal his identity: “I’m you, only with less hair and problems you can’t imagine.” He also meets up with the younger Taylor, and this unlikely trio teams up to plot a course around their future relationship troubles, prevent John’s sister from making a tragic decision, and stop George W. Bush from becoming president.

For me the most interesting slant to this book was the protagonist coming to terms with his younger self. The two really don’t like each other, but need to work through several issues in an attempt to accomplish their goal.

As much as I enjoyed this fast, witty read, it is not without flaws. The characters, although charming, never feel more than one-dimensional. Cheney and Bush were cartoon figures, not remotely believable. Still, in a fast paced comedy, that is easily overlooked.

Being a liberal, I enjoyed the book’s bald-faced left agenda. I believe, however, that many of the books political rants (and there are many) might offend anyone who voted for Bush/Cheney.

Lastly, I found the second half of the story lagged a bit, as it became even more far fetched. This plot has a dozen holes you could fly a 747 through.

This is a fun, original comedy that had me occasionally laughing out loud and often snickering to myself. I can recommend it to liberals who enjoy a light, clever read. 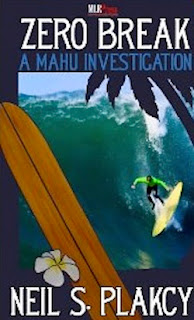 Openly gay homicide detective Kimo Kanapa’aka is back solving his sixth mystery in the Neil Plakcy’s Mahu series.  A lesbian woman is found dead in what appears to be a home invasion robbery.  She leaves behind an ex-partner and their adolescent daughter. But as Kimo and his partner dig deeper into the circumstances, they uncover a complex case of corporate fraud, greed, and more murders as the villains try to cover their tracks.

I have now read four of Plakcy’s Mahu series books and enjoyed the first three. With Zero Break, however, I had issues, and nearly gave up on it more than once.

The murder mystery seems to be a secondary storyline, taking back stage to Kimo and his lover’s (Mike) drawn-out discussion of whether to adopt a child. The topic is broached when Kimo finds that the murder victim, a lesbian woman, had been raising a child with her partner. This draws Kimo and Mike into a should-we/shouldn’t-we back and forth discussion that analyzes all aspects of gay adoption and parenting. Because the main thrust of the story is about gay adoption, I felt solving the mystery suffered, and the author didn’t put his usual flair into it. It seemed to me Kimo was simply going through the motions of solving a crime.

One of the most enjoyable parts of the earlier Mahu series, for me, has been Plakcy’s interesting details about island life and Hawaiian culture. That was almost totally missing from Zero Break, and I felt let down because of it.

Both the plot and Kemo’s character were not given the depth I’ve seen in the previous Mahu books. In short, I found Zero Break rather dull.