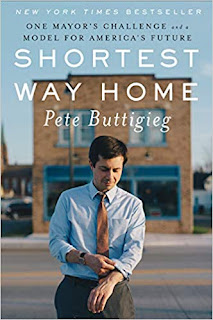 In its heyday, South Bend, Indiana had been one of the industrial revolution’s brightest achievements, a factory town that produced everything from cars to watches. But then like much of the Midwestern rust belt, it fell into hard times, lost almost all its industry, and the young people were escaping to larger cities for better opportunities. The leadership Pete Buttigieg displayed as mayor of South Bend, steered the people of South Bend to rebuild their city into a thriving community.

In this entertaining and insightful book, Buttigieg lays out a blueprint of modern political ideas for transforming and revitalizing our communities. I enjoyed learning about his insights, and how he approached problem solving. And against this backdrop of how Buttigieg renovated the city he grew up in, was the even more enjoyable personal story of how Pete Buttigieg grew into the man who is now altering the landscape of the American political scene by becoming the first openly gay man to run for the highest elected office in the country.


In my view, the biggest thing to turn the tide on LGBT issues wasn’t theological or political evolution. It was the discovery that many people whom we already know turn out to be part of this category. The biggest obstacle wasn’t religion, or hatred. It was the simple fact that so many people believed, wrongly, that they didn’t even know anyone who was gay. At my high school in the late 1990s, I didn’t know of a single gay student.

It is easier to be cruel, or unfair, to people in groups and in the abstract; harder to do so toward a specific person in your midst, especially if you know them already. Gays have the benefit of being a minority  whose membership is not necessarily obvious when you meet one (or love one.) Common decency can kick in before there is time for prejudice to intervene. Of course, humans can be cruel to people we know, too, but not as often—and we’re rarely as proud of it.

In the struggle for equality, we do well to remember that all people want to be known as decent, respectful, and kind. If our first response toward anyone who struggles to get onto the right side of history is to denounce him as a bigot, we will force him into a defensive crouch—or into the arms of the extreme right. When a conservative socialite of a certain age would stop me on the street with a mischievous look, pat my arm, and say conspiratorially, “I met your friend the other day, and he is fabulous,” it was not the time for a lecture on the distinction between a partner and a “friend.” She is on her way to acceptance, and she feels good about her way of getting there; it feels better to grow on your own terms than to be painted into a corner.

This well-written, insightful book is a mosaic of growth and hope, both for South Bend and for Buttigieg. Pete delves into his childhood growing up in a decaying industrial town, his attempt to escape that town and the promise that brought him back. He describes his experiences being a Harvard and Rhodes Scholar, Mckinsey alumni, and a talented musician. He tells of his military service, gives a frank and interesting account of coming out at age thirty-three, and also about finding love.

I found this a fascinating read. I didn’t find him as “presidential” as Barak Obama or Bill Clinton, but I did see a very intelligent, capable, and positive role model who transcends the “gay” stereotype. What comes shining through is his integrity and altruism.

Posted by AlanChinWriter at 10:00 AM

Need The To Hire A Hacker❓ Then contact PYTHONAX✅

The really amazing deal about contacting PYTHONAX is that the Hack done by us can’t get traced to you, as every Hacking job we do is strongly protected by our Firewall. It’s like saying if anyone tries to trace the Hack, it will lead them to us and we block whatever actions they are doing.

We have been Invisible to Authorities for almost a decade now and if you google PYTHONAX, not really about us comes out, you can only see comments made by us or about us.

Another Amazing thing to you benefit from Hiring our Hackers is that you get a Legit and the best Hacking service, As we provide you with Professional Hackers who have their Hacking Areas of specialization.
We perform every Hack there is, using special Hacking tools we get from the dark web.


Whatever Hacking service you require, just give us an Email to the Emails Address provided below.
pythonaxhacks@gmail.com
pythonaxservices@gmail.com