Before Night Falls by Reinaldo Arenas 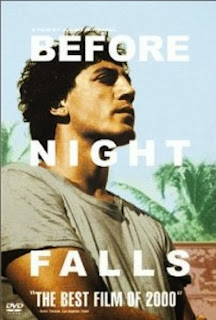 Before Night Falls is Reinaldo Arenas’s stunning autobiography—a brave and unrestrained account of his life as a gay writer under the Castro regime. Arenas, acknowledged as one of the great twentieth-century Cuban writers, was born in 1943 into a poor, rural Cuban family. At the age of fifteen, he joined Castro’s guerrillas against the Batista’s right-wing regime, only to find that corruption and oppression under Castro was far, far worse.

Early in Reinaldo’s writing career, he had two manuscripts smuggled out of Cuba and published in France. That simple act branded him a traitor, and he spent twenty years surviving his “re-education” which included several years of imprisonment at El Morro prison in Havana.  The conditions he describes of El Morro are as hellish as any Jewish concentration camp, Russian Gulag, or Bangkok prison.

Reinaldo was able to flee Cuba in 1980 during the Mariel exodus, and lived in New York until losing a battle with AIDS in 1990. Before Nightfall was begun before Arenas left Cuba and was completed shortly before he died.

The thing that leaps out at the reader is Arenas’s vivacity, resilience, and his vast courage. This is a truly inspiring read. This book is raw, fierce and shocking, yet often touching and lyrical. It is particularly well written, revealing the horrors of the Castro regime, but more importantly, the valor of the human spirit. A must read.