The Geography of Murder by P. A . Brown 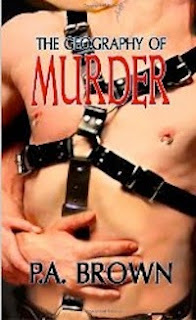 Jason Aaron Zachary knew it was bound to be a bad day when he woke up next to a corpse who’d hours before had had his head bashed in. But things quickly grew worse as he was yanked to his feet and cuffed by a Santa Barbara Police detective named Alex Spider. A few hours later he was booked for murder one and sent to the county lockup to await arraignment.

Detective Alexander Spider, an openly gay police officer, had an immediate gut level attraction to Jason, but the kid was the kind of punk going down the toilet fast. Jason looked like he was into drugs, hustling , and about to be slapped with an open-and-shut case of murder one. But something didn’t smell right about the case. It seemed too easy, like someone had set the kid up to take a fall.

When things looked darkest, Jason couldn’t believe it when Spider paid him a visit in the county lockup, telling him there was new evidence that proved Jason’s innocence. Hours later, Jason found himself free from jail and riding home with this macho detective stud. Once at home, what Jason thought might lead to some hot sex did, but things got rough, and rougher, and rougher still, until it became clear that Spider intended to beat him into submission, and then own him, body and soul. Jason had leaped from one prison to another. But this new prison had its advantages…

This is not the first P.A. Brown novel I’ve read. So when I picked up this book, I expected a well-plotted murder mystery with the focus on sniffing out clues to solve a difficult murder or two. What I quickly realized was, although there is a murder case for Spider to solve, the guts of this story is a BDMS romance between Spider and Jason – one that takes them from being enemies on opposite sides of the law to painfully exploring the boundaries of a rather kinky relationship.

This story is unusual in that it is told in first person from two different protagonists. Each new chapter switches the narrator, first Jason then Spider, and so on. This POV swapping was slightly jarring at first, but it permitted the author to dive deeply into both characters’ persona, and allowed the reader to know them both intimately. My only issue about this POV switching was that both voices were similar. I felt that the author could have put more effort into making each voice more distinct.

This tale reads fast, and has the author’s usual spot-on attention to detail. The prose is raw, giving insight into the characters behind the words. Yet all too often the author used a word that was so inapt that I was jerked out of the story to ponder the choice of words. One example would be, “He jumped in the car. Cranked it on.” I couldn’t help wonder, how do you crank on a car that was built after 1915? But of course, that is only one of many examples.

The main issue I had with this story was purely a personal one. I didn’t like one of the main characters. I found Spider to be quite the hypocrite. One minute he was on a soapbox making speeches about pedophiles who can’t control their urges, and the next minute he had Jason chained to a wall and whipping him before having unprotected sex. It is difficult to be excited by a romance when you detest one of the players. But like I say, that was purely a personal issue. Most readers will not share my prejudices.

These two characters are drawn together, then struggle to overcome several obstacles. The author skillfully pulled me into their drama, and although there were relatively few sex scenes, they were hot. At times the sex went over the top for my old fashioned sensibilities, but never enough to keep me from flipping to the next page to see what happened next.

P.A. Brown is an exceptionally talented writer, and although I do not consider this story to be on the same level as her other novels, it is a well written, absorbing, and entertaining romance that I can recommend.

Thanks for the review, Alan.