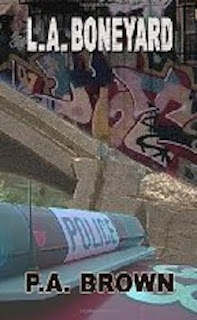 For the record, I only review books I like. If I don't like it, I don't mention it. So, you can be sure before you go any further that I liked this first rate police procedural by Pat Brown, albeit with some reservations.

A rock solid plot and mostly brisk pacing keep the pages turning. LAPD detective David Laine is confronted with a pair of bodies buried in Griffith Park, the start of a particularly grisly murder investigation that take the detective from high rise elegance to ghetto drug-slums, with all kinds of stops in between. Brown's grasp of police procedure is awesome, you'd almost think she'd been there, done that, and she brings The City of the Angels so vividly to life it made this old Angeleno homesick for a burger at Tommy's. Both lend the story a terrific sense of believability, as does a fine ear for dialogue.

On the personal side, David's domestic partner, Chris, is in an accident and then out of town, leaving David pretty much on his own for a while. Not a good time for it, either, as David's new detective partner, sexy Jairo, is coming on to him like gangbusters. David loves Chris, and he wants to be faithful, but he's a guy, and there's an old saying about a stiff willy and its lack of conscience. It isn't long before Jairo has David's willy stiff far beyond the point of clear thinking. Like Jimmy Carter, David is lusting in his heart and in no time Chris is sniffing the situation out and having hizzy fits.

The sexual tension between the two policemen is achingly real, in large part because their characters are brilliantly drawn. David's domestic situation is a bit less convincing, because Chris is not so likeable, though that may be partly my personal aversion to a certain type of gay male, the hizzy fit throwers. In which case the author has made him real enough for me to dislike him, so maybe that counts. And, since the novel is mostly plot driven rather than character driven, Chris's actions generally serve to further the plot. So, he obediently goes out of town when needed or has those fits for no better reason than to ratchet up the tension for David and Jairo. Hey, it works, but it left this reader rooting for super cool Jairo, which may not have been the intended goal.

The mostly fine writing sparkles, but there are problems, too. The Dreaded Spell Check Disease, for one, which leaves the book, like so many today, littered with wrong words: Poured for pored, and plateau for tableau, e.g. There's not much of a cure for the disease, either, except greater care. Maybe a sharp-eyed beta reader? But, the truth is, many of these mistakes will go unnoticed by readers, too. The disease is unfortunately epidemic.

Worse by far is the Curse of the Dangling "He". Worse because, ideally, a novel is like a dream shared by author and reader. One wants the reader to forget he's reading a book, and "live" the story. But there's an abundance of those danglers here, and every time I have to stop and reread a paragraph to figure out who's speaking or doing what, I'm yanked out of the spell. Alas, with practice we perfect our mistakes as well as our virtues, which is to say, this is a writing habit that tends to take over if not weeded out of one's literary garden.

Less critical (but still too important for a writer this good not to get better at it) are an abundance of jarring transitions from one scene or setting to another. This too simply requires paying a bit more attention when shifting gears. Yes, it's extra work. Writing is easy. Writing well takes effort.

The reader will find as he nears the ending, that there is an unnecessary coda, the nature of which I won't divulge, but the story actually stops about five pages before the book does, and the reader can also with no great loss.

These are a writer's kind of complaints, however. They matter only in the sense that they keep a good author from being that much better. They are not likely consciously to effect most readers, who will find this a very enjoyable read, and who will almost certainly plow through it as I did in one sitting, turning the pages steadily to the end.
http://www.pabrown.ca/
.
Posted by AlanChinWriter at 1:23 PM

Glad to greet you, ladies and gentlemen!

We are not acquainted yet? It’s easy to fix,
friends call me Nikolas.
Generally I’m a venturesome gambler. all my life I’m carried away by online-casino and poker.
Not long time ago I started my own blog, where I describe my virtual adventures.
Probably, it will be interesting for you to read my notes.
Please visit my web site. http://allbestcasino.com I’ll be interested on your opinion..

Nice brief and this enter helped me alot in my college assignement. Thank you on your information.

Trying to find an innovative and lucrative [B][URL=http://www.tiffanysfree.com]tiffany pendants[/URL][/B] business? A business on sterling silver jewelries may just be the one you are [U][B]tiffany engagement rings[/U][/B] looking for. It's never that too difficult to find reasonably priced Tiffany wholesale jewelry to get you [U][B]pandora beads[/U][/B] started on your way to being financially independent. The Internet is actually a good place [B]pandora bangles[/B] to start. You virtually spend nothing to find the supplier you are seeking. No need to be technically knowledgeable to find [U]tiffany rings][/U] your valuable information, a simple understanding of how to operate the computer and use a reliable search [B]tiffany[/B] engine is all you need.

Once you find your tiffany wholesale supplier, your quest [U][B]pandora jewellery[/U][/B] doesn't end there. You need to understand jewelry selling basics and selecting the styles that are most appropriate [B]tiffany jewellery[/B] for your niche market as well as having the eye for designs that will [U]tiffany london][/U] most likely sell. You must also learn the tricks of finding out which jewelry pieces are [B]pandora bracelet[/B] of superior quality. There are an abundant source of suppliers for Tiffany wholesale jewelry, you just need [B][URL=http://www.pandoraforyou.com]pandora bracelet[/URL][/B] to have that discriminating taste in ensuring you get to the best source. In this business, if you start with low quality [U]tiffany jewellery][/U] pieces, your business will suffer.

The key to a profitable and lucrative business is to build a [U][B]pandora jewellery[/U][/B] large customer base. In order for you to get customers to comeback you must be [B][URL=http://www.tiffanysfree.com]tiffany uk[/URL][/B] able to please them with the quality of your items as well as the attractiveness of your designs. Always find unique [U][B]tiffany pendants[/U][/B] and stylish designs, you wouldn't want to sell everybody else is selling. If your pieces are just ok and plain you may have difficulty [U][B]tiffany sets[/U][/B] keeping faithful customers. Aside from having quality merchandise you [U][B]pandora jewelry[/U][/B] also should be pricing them reasonably, not too expensive but not too cheap. Always make [B]tiffany uk[/B] your customers feel special in finding the best priced jewelries they [U][B]tiffany jewellery[/U][/B] can find.


Finally you will have to decide how you want to sell [B]tiffany earrings[/B] your items. E-commerce is of course very interesting but then in-store is also great [U][B]pandora bracelets[/U][/B] because nothing can beat the appeal of seeing the Tiffany jewelry pieces in person. It basically ends [U][B]tiffany bracelets[/U][/B] with how much you can invest in the business e-commerce will be favorable if you want to cut [U]pandora bangles[/U] down on overhead expenses. On the other hand in-store selling may just make up for expenses of maintaining a [U]tiffany & co][/U] showroom because customer find tangible [B]pandora[/B] stores are easier to trust.

Thanks for the info: I thought i could do something like that but i'm never sure how write protected these things are. we'll talk.
P90x Workout Program

[b][url=http://www.uggsclearancebusiness.com/]uggs boots clearance[/url][/b] However, some corporations will do their ideal to offer a person the very best fees potential. Discovering an annuity customer can, in certain approaches, be like obtaining a house loan broker. Anyone ought to get as lots of offers as you possibly can and analysis the products and services that every provider provides before you make any selections..

[b][url=http://www.uggsclearancebusiness.com/]uggs[/url][/b] Update your working method and vital method software package. Software upgrades offer you the latest safety towards malicious pursuits. Activate automatic updating if that feature is obtainable. There does exist many good manufacturer title names marketed during the market place, but nonetheless , Lv purses and purses undoubtedly are a member of the most critical the superior produce down. You are able to obtained replica Lv dance footwear, but in addition for the style conscious people, very uncomplicated capture considerably to indicate correct through the artificial edition. Reputable Louis Vuitton purses aspect a rock reliable splendor, which could also put together by yourself..

[b][url=http://www.uggsclearancebusiness.com/]www.uggsclearancebusiness.com[/url][/b] A: I'm generally very careful when choosing products that appear as Artwork Deco. Talk to when they seriously are Art Deco or "Art Deco style" or "Art Deco reproduction." There will be described as a sizeable variation in value and likely resale. You must also consult when the piece is primary.

[b][url=http://www.uggsoutletnow.com/]uggs outlet[/url][/b] The civilian armored automobiles typically viewed are possibly manufactured within the manufacturing facility or are retrofitted variations of Series vehicles. The procedure of transforming a standard car to an armored 1 normally takes some weeks. There is a labor intensive course of action involved with which the windows on the car or truck are changed with bulletproof glass and layers of armor are inserted less than the outer skin of your vehicle.

[b][url=http://www.louisvuittonsalemarket.com/]www.louisvuittonsalemarket.com[/url][/b] The manually wound movements was designed in-house by LV, with aid from an un-named unbiased watchmaker. The watches may be customized to the hearts need and is supplied in white, rose or yellow gold. Look into our up close and personal training video of your check out displaying off its acoustics immediately after the split..