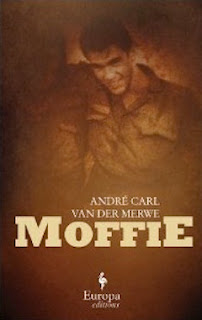 Like every gay boy in 1970s South Africa, Nicholas van der Swart must hide that part of himself that is different from other boys, especially from his father. Nicholas grew up fearing his tyrannical father, an abusive Afrikaner devoted to apartheid and all things manly. And Nick grew up being ashamed of himself, thinking he was an abomination against God.

Nick is conscripted into two years of mandatory army life when he turns nineteen years old. The military goes against everything Nick feels at his core. He is a pacifist, but the lure of freeing himself from an oppressive home life helps him cope with the reality of becoming a soldier fighting for a cause he doesn’t believe in.

But Nick finds that the nightmare of living at home is nothing compared to the hell of boot camp. Within his company, he is labeled a Moffie (a queer), and his superiors stop at nothing to destroy him. At the same time, he makes three close friendships, and even falls in love. Nick finds that the one thing that is more terrible than the physical abuse he endures every day, is the mental torcher of not being able to tell his close buddies and the person he loves what he really feels for them. He must keep that secret locked deep in his heart, or risk being shipped off to a mental hospital for shock, drug and hormone treatments.

After boot camp, Nick and his friends are shipped to the boarder where South Africa is at war with Angolan terrorist. On the battlefield, Nick learns a valuable lesson: to not ask God to help him, but merely to put his life in God’s hands, become an instrument of the Almighty, and accept God’s will. Within the depths of this military torture, bloodshed and his new religious faith, Nick is able to acknowledge his homosexuality and come out to the men he cares for. His coming out somehow helps him find the strength to survive.

I found it hard to believe that Moffie is Andre Carl van der Merwe’s debut novel. This is a powerful, emotional, well-written gem. This author writes with all the polish of a seasoned professional.

The story grabbed my gut on page one and didn’t let go. It starts with the protagonist fighting a hopeless and heartbreaking home situation, then the reader watches Nick’s life disintegrate from there as he free-falls deeper and deeper into hell. The reader shares his anguish, and craves revenge against an unjust world. And just when it seems that Nick has reached the lowest level of purgatory, the reader realizes there are deeper regions yet to discover.

I did have two minor issues with this story. First, I felt the author relied too heavily on clichés. It starts with a rather cliché battle between a gay teenaged son and the hard stoic father who wants his boy to go into the service so they will make a man of him. The mother, of course, is overly protective—more cliché—followed by the company Sergeant who takes a disliking to the hero and tries to break him. It’s all been done so many times before.

My second issue is that sprinkled throughout the storyline are numerous flashbacks to the protagonist’s childhood to demonstrate the battles and hardships of his development. I felt most of these flashbacks added little or nothing to the story, and were a distraction to the main storyline.

Both of these issues are easily overlooked. This is a tale of survival, of love, and of finding the light of courage when the world is pitch black. The story is not for the faint of heart. If you are looking for a pleasant beach read, then keep looking. Moffie is a gritty, brutal, poignant, gut-twisting read, and the reader will surely feel a euphoric sense of accomplishment upon completing that last chapter as the writer skillfully lifts the reader back into the light.

This is a somber drama that I thoroughly enjoyed, and can highly recommend to serious readers.

This sounds great I need to read and review this one now.