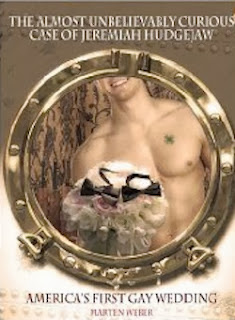 Set in the beginning of the 1900’s aboard the RMS Noricum, traveling from England to New York, Jeremiah Hudgejaw is on the lookout for a husband for his daughter and a wife for himself. Jeremiah is a super rich, super homophobic, self-absorbed loudmouth who has a knack for offending nearly everyone he meets. Also, he often can’t tell if a person is male or female, which gets him into trouble when he is smitten by a young steward who he mistakes for a female.

Jeremiah is joined on this cruise by several quirky characters who provide both humor and romance. The comedy is built on the kind of absurd misunderstanding one finds in Oscar Wilde’s plays.

The writing is well crafted, fast paced, and breezy in this somewhat entertaining historical satire that takes a tongue-in-cheek look at the topic of homophobia and gay marriage. The story is rather predictable, the premises are too absurd, none of the characters are likeable, and the humor gets tiresome, yet it leaves a smile on the reader’s face.

Posted by AlanChinWriter at 11:55 AM No comments:

Alma’s Will by Anel Viz 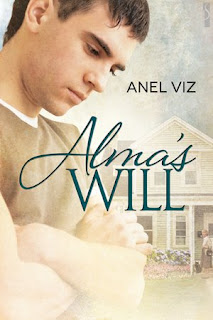 Alma’s Will, by author Anel Viz, is a powerfully dramatic story of one woman’s innate bigotry, homophobia and hatred, concreted in her passionate faith in the Bible and God. The novel is set in the rural southern town of Macon, Georgia, where generations have been rooted in historic prejudice and intolerance.  Alma’s Will begins upon the death of an old woman who lived her entire life in the shadow of her stern husband, doing as she had been taught was expected of her, standing silent when her only teenage son was tossed out of the house and onto the street for being a homosexual.
If the plot sounds cruel and heartless, it is, an in-your-face, malignant testament to the realities of society today, where bigotry and hatred continue to reign prominently. However, the story proves just as important with its displays of inherent love, understanding and forgiveness that ultimately prevail, responsible for shaping more lives than an obstinate protagonist who grew to emulate her mother and an abandoned brother who survived a traumatic childhood, and learned to love and accept himself.
Readers will experience a full range of emotions reading Alma’s Will, an intense story told through varying points of view that prove all encompassing, each uniquely important to the plot. Telling a story through the eyes of a bigoted, hateful protagonist might mean suicide for most writers, but author Anel Viz keeps the story intensely thought-provoking and promising with his solid writing and strong message of hope displayed through the actions and humility of his characters. Alma’s Will is one fine read that I highly recommended.
Website: http://bookworld.editme.com/AnelViz
Buy link for the e-book: https://spsilverpublishing.com/almas-will-ebook-p-1468.html
Buy link for the print book: https://spsilverpublishing.com/almas-will-print-p-60417.html
Posted by AlanChinWriter at 7:35 AM No comments:

A Vision of Angels by Timothy Jay Smith 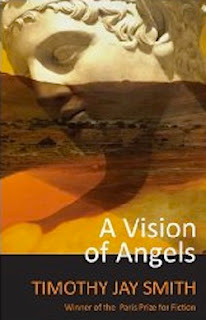 Timothy Smith has written a gripping tale of love and hate that is set in the Middle East. A terrorist threat for Easter Sunday in Jerusalem sets off a chain of events that weave together the lives of an American journalist, an Israeli war hero, a Palestinian farmer, and an Arab-Christian grocer.

Major Jakov Levy closes the boarder between Israel and the Gaza Strip when he is alerted to a suicide bomb plot. With the closing, Amin Mousa is unable to get his produce to market, so he dumps truckloads of tomatoes in a refugee camp. David Kessler, an American journalist, uses his press identification badge to cross the boarder and drive into Gaza for Amin's story.

Hamas militants plot to hide a bomb in David's car and retrieve it when he returns to Jerusalem, but he's unexpectedly detoured on the way. Meanwhile, a Hamas cell member confesses to the plot, and the race is on to find David and retrieve the bomb before the terrorists can.

The author has penned an ambitious and gripping story from several points of view while keeping the writing unbiased and compassionate. It shows the volatile grudge match that characterizes the Israeli-Palestinian conflict from all sides and perspectives. Unbiased does not mean the story is flat, far from it. This is an emotional rollercoaster from first page to last.

This story is told from many different characters’ points of view, which its strength, and also it’s downfall. The narrative switches points of view every few pages (sometimes twice per page) over a wide array of characters. It is interesting to see the story from all sides, yet, I often found it confusing trying to keep track of so many players, and because so little time was spent on each one, none of them were able to reach the depth that I had hoped for. These characters were far from one dimensional, but I expected more from the four protagonists.

This is not an easy story to read, both from an emotional standpoint and a technical one. The author has a lean and edgy prose style that I enjoyed, yet I found it jarring each time he switched from past to present tense and back, which was often. I also found it jarring to switch points of view so often. This is a modern style of writing that an old dog like me has yet to appreciate.

The author ends the story on a symbol of hope for the future, yet I failed to feel that hope. What I was left with was the tragedy and futility caused by the constant collateral damage in cultures where hate is allowed to flourish.

I do recommend this read. It is an enthralling tale, which shines a light on the issues of that precarious region, told by an author who had lived there and experienced it first hand.

Posted by AlanChinWriter at 9:28 AM No comments:

Jack Holmes and His Friend by Edmund White 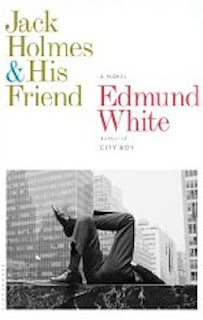 Edmund White has laid out an ambitious tale that chronicles the shifting sands of the sexual revolution—as seen from both straight and gay viewpoints—from the early ’60s until the start of the AIDS years. White presents the gay perspective through the eyes of Jack Holmes, a man who realizes he is gay when he falls for his straight fellow journalist and work-buddy. The straight point of view is seen through the eyes of failed novelist, Will Wright, Jack Holmes’s love interest.

The first third of the story is a cliché coming out story where Jack anguishes over his unrequited love for Will, while struggling to deal with his ‘illness’ of being gay. The story shifts to Will’s point of view, where Will experiences the cliché “straight-man in mid-life crises”, while Jack goes on the prowl every night for sex, both characters becoming the liberated sexual animal that was common during the ‘70s. The story switches back to Jack’s POV as they enter the AIDS epidemic and both characters are forced to make adjustments to their relationship and their lifestyles.

On the surface, this is gay/straight friendship with all it s highs and lows, the kind of story that’s been written a dozen times or more. Dig down a few layers, and the reader sees the progression of the gay movement by two self-absorbed characters dealing with the changing times and changing attitudes.

White is a master at eloquent prose, and I applaud the ambitious scope of this story. I did, however, find this a difficult, often boring read. Neither Jack nor Will are particularly interesting or likable. I often felt that Will was merely a mouthpiece to spout every straight cliché attitude of the times. Once the story switched to Will's first-person point of view, the story looses what little momentum it had, and was never able to recover it.

White’s flowing narrative and social observations, however expressive, is chocked full of tedious description. It occasionally felt like wading through molasses. His articulate prose, however, was the bright star of this work—at times lyrical, other times gripping.

Admittedly, I’ve never been a huge fan of Edmund White’s work, and this novel did little to alter my opinion.